​DISCLAIMER: This is a personal website offering personal opinions combined with public information. It is not endorsed nor funded in any way by Maxime Bernier and/or the People's Party of Canada. Please note that while "Dredge the Canal" will be moving to my new website www.ledicarusmedia.com this listing of Maxime Bernier / PPC videos will remain here for easy reference.
The point of these links are to give you a clear sense of how Maxime Bernier responds to questions and where he and the People's Party of Canada stands.

I have started expanding this page to include OLD articles to show what Maxime Bernier personally stood for before 2014. Why? So you can understand that many of his personal ethics and opinions have remained unwavering for a decade.

Please report any failed video links here.
People's Party of Canada News / Speeches Link
ARTICLE: National Post: Maxime Bernier has one election regret, November 17, 2019
SPEECH: Fixing Canada - The Political Challenge, November 16, 2019
ARTICLE: Fixing Canada The Political Challenge, November 17, 2019 (video)
Bernier Breaks Post Election Silence At Western Independence Conference, November 16, 2019
Maxime Bernier calls for Elections Canada investigation into Conservative financed smear campaign, November 5, 2019
You may notice there is a gap here. Immediately following the election the mainstream media has gone out of its way to continue to smear and discredit the future of the People's Party of Canada, publishing negative opinions and outright lies (not based on any facts) that the Party is dead and not continuing. The facts could not be further from what is being published. The PPC is alive and still in the fight for Canada! 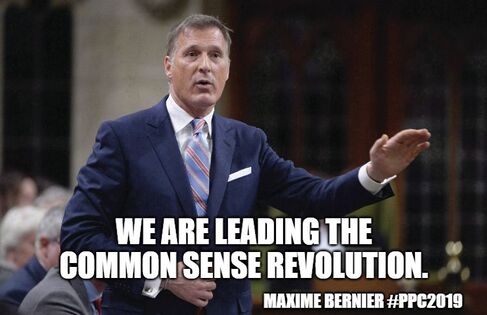