The following question was asked in three separate polls on Twitter during the early part of September 2019. Each poll lasted a period of 7 days. The responses to those individual polls are presented below. Each section includes the number of votes received and the comments received to each poll. A total of 2,586 votes were received.
QUESTION: What is the most important issue for you in this Federal election (all answers being pro-Canada)?
Sovereignty / Canadian Values   50%
End Identity Politics   18%
Small Government / Less Arbitrary Laws   17%
Lower / Less Taxes   16%
Poll responses: 160
Comments: 20
Breakdown of Comments (number of comments mentioning issue, if several were named only the first one was counted): Immigration 3, Lower Taxes 2, Smaller Government 2, Corporate Welfare 1, Health Care 1
Desired "All of the Above" as a choice: 8

QUESTION: What is the most important issue for you in this Federal election (all answers being pro-Canada)?
Removal of UN Influence   50%
Freedom of Speech   30%
Rule of Law / Corruption   17%
National Security / Defence   3%
Poll responses: 357
Comments: 31
Breakdown of Comments (number of comments mentioning issue, if several were named only the first one was counted): Immigration 4, Freedom of Speech 3, Rule of Law/Legal Process 2, Removal of UN influence 2, Smaller Government 1
Desired "All of the Above" as a choice: 13 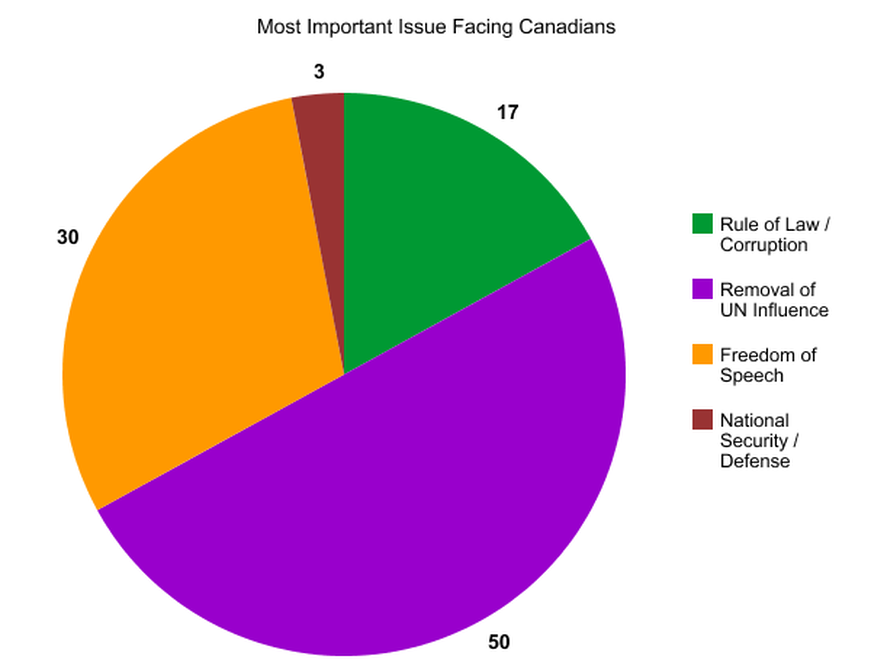 QUESTION: What is the most important issue for you in this Federal election (all answers being pro-Canada)?
Immigration / Refugees   47%
Economy / Deficit / Debt   33%
National Energy / Pipelines   18%
Supply Management / Trade   2%
Poll responses: 807
Comments: 79
Breakdown of Comments (number of comments mentioning issue, if several were named only the first one was counted): Removal of UN influence 8, Economy 6, Freedom of Speech 6, Rule of Laws/Legal 4, Immigration 3, Ethics 3, Security 2, Sovereignty 1, Religion 1, Health Care 1, Property Rights 1, Freedom of Speech 1, Education 1, Environment/Climate Change 1
Desired "All of the Above" as a choice: 18 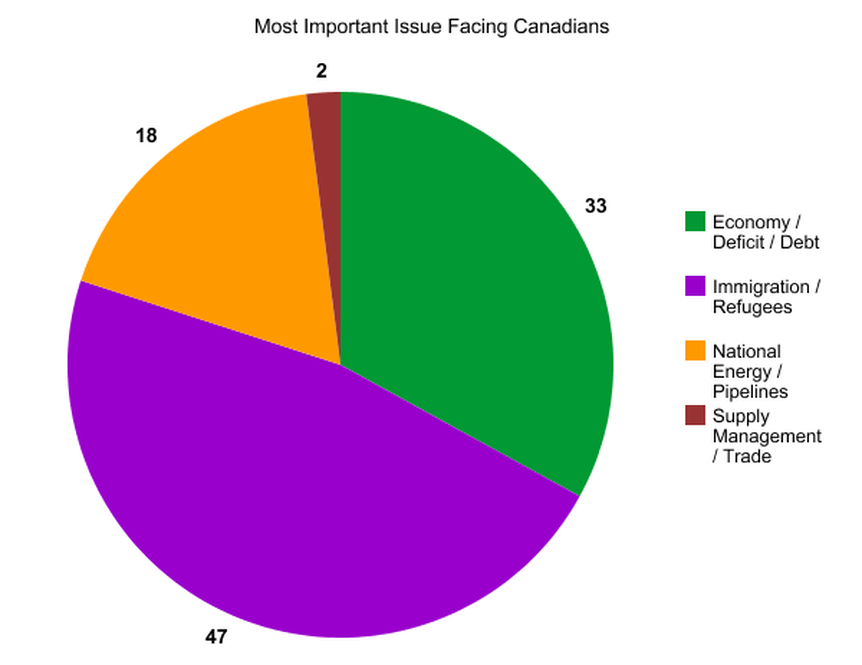 Our Canadian sovereignty is very important to those who responded. The top three poll percentages applied to those issues that may benefit and/or threaten our sovereignty as a nation: Preservation of Canadian Values, Removal of UN influence, and the importance of Immigration/Refugee Policy.

'Climate Change' was intentionally omitted as an option because I wanted people to look beyond the 'issue of the day according to mainstream media' and look at all of the other things happening in our world.

It is interesting to note that while respondents were given the opportunity to identify 'climate change' (or related) in the comments only ONE COMMENT identified the "Environment" (climate change) as the most important issue facing Canada in this Federal election. ONE out of 2,586 possible comments that could have been presented (130 comments made).

There was 1 comment stating that the mainstream media said 'climate change' was the most important to Canadians but I corrected to commenter and asked for their own individual personal view. They did not respond. It was not included in the breakdown of comments above.

While 'all of the above' was an option given in the comments section it was not offered in the options because I couldn't rank the importance of one issue over another if everyone just chose 'all of the above'. I wanted respondents to have to choose the answer that spoke to them personally.

I personally wish Twitter offered more options for a poll but I found that by breaking the topic down into three separate polls I was able to come up with more insightful options to choose from.

Due to the nature of these polls they can not be merged into a final poll as the participant counts vary between polls.
Asked in May 2019,

I asked this question in a few places on the internet about two months ago.
Here are the answers. Do you have other answers, please send them to my email.

What is a Canadian (culture, society, ethics)?