LATEST UPDATES ARE AT THE BOTTOM OF THIS PAGE!
May 30, I had planned to have these in a garden by now but that project was delayed once again. I just hope I haven't wasted my time and money.

The salad greens are growing briskly, the chives are starting slowly and that oddball one at the end there is a Summer Squash (it pays to keep a growing journal).

​We had a week of 25'C plus temperatures, the weekend is cold and rainy around 10'C. Next week is perfect for starting crops at 15-20'C.
June 7 Update: so the seed pods didn't do so well when I moved these outside. It looks like most of the pods have died back from the sun. That's okay because we finally got the gardens moving ahead. The top soil and peat was added this past weekend and I will be sowing the seeds in the next day or so.

​We have a new garden set up here, next to the house, that measures about 60 inches by 100 inches. 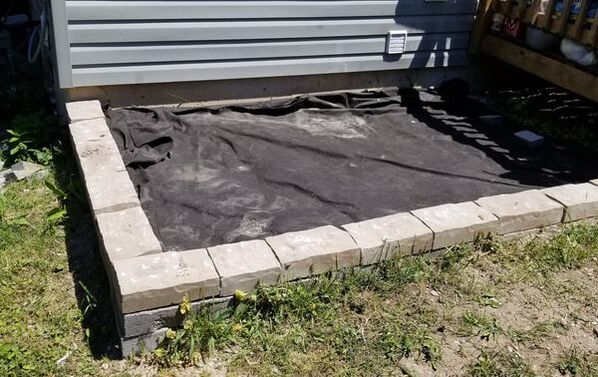 And a bonus garden along the fence-line that measures 25 inches by 211 inches. I have been given the go-ahead to plan out and plant both of these gardens. This is my project for 2020. I will update you once I have planted the seeds as to what crops we're looking at this year.
​ 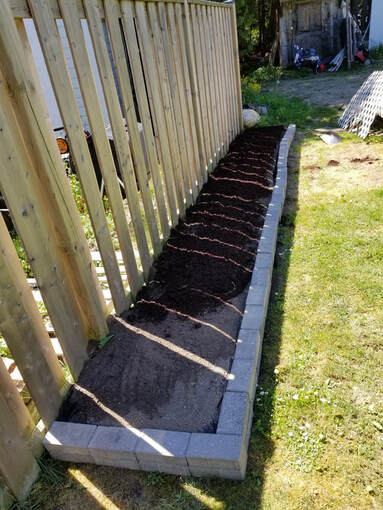 June 30, 2020
Well, good news, maybe. For the last week I have been battling pests in my bean plants that ate holes in the leaves. I believe they were mites or fleas since I did not find any webbing or beetles. I thought I had lost the entire crop but bringing in the "big guns" might have helped.

First, I tried soapy water, which I believe succeeded only in killing some of the leaves.

Next I picked off the worst infected and went out and bought some diatomaceous earth to combat the pests. I followed this up with a good dose of Miracle Gro granules.

It looked like it might be a lost cause, losing all of my bean crop, but on checking it this morning I found new leaves in the middle of some of the stalks. There is a chance that they will grow and regenerate the plant in time. I removed the ones without any growth and the ones with bad leaves on them and my goal tonight will be to plant new seeds in the holes left behind. Any chance of growing at this point is better than none.

I will give it another dose of Miracle Gro in a few weeks (and the new seeds now) and see what happens. At least next time I will be sure to run out and grab some diatomaceous earth at the first sign of the pests. I believe it helped stop the invasion.

Following are some photos in no particular order (early days of invasion visible).
​
Included below are some photos of the devastated rows. This is after the invasion, treatment and removal of the dying stalks. I believe there is enough left on the remaining stalks to regenerate. I will fill in the holes with seeds in the hopes that they grow in time.

HA! Guess who I just caught in the bean patch, the little f*cker was shown no mercy. I have a bit of diatomaceous earth left. Hopefully, Canadian Tire Kincardine has more, they always seem to be out or nearly out of stock on things when I need them the most. Snow shovels, snow brushes, windshield covers, and I bought their last bottle of DE last week. It's a bigger store with lots of empty shelves.

The war continues. The second dose of diatomaceous Earth with insecticide was applied to the bean leaves today.  I had hoped it would have an effect but then I discovered a beetle on the nearby pumpkin leaf. I decided it was time to fight nature with nature...
​
I call it, Day of the Geraniums! Geraniums are said to be one of the flowers whose scent helps to repel pests.  At least Canadian Tire still had a decent garden center set up, Walmart's was closed down and Home Hardware was at 50% off. It's only July 3rd!!

Flowers on the beans (they've held on), cucumbers and pumpkin plants. The cucumber plants have taken over a large portion of the garden and keeping them in check is a challenge. The tomato plants have grown substantially in the past two weeks and are getting quite tall. I need to figure out a way to tie them up before they break.
August 18, 2020 Updated Photos

I'm sorry I haven't updated this in a while. I will try to do it before November is over.

It is definitely time for an update.I just placed my seed order for 2021 with William Dam Seeds. Last year my budget was $200.00 for the garden including accessories. I went over budget with a final cost of $284.72
I ended up spending about $164.59 on seeds and soil with the rest going to a variety of chemicals, gloves, a hose nozzle and geraniums (part of my battle against the bean leaf bugs).

This year we will have seeds and bulbs for: beans, beets, cucumbers, peppers, tomatoes, pumpkins, and a large variety of flowering plants. I have decided to scale back the wildflowers and pumpkin plants this year. They occupied the side garden along the fence. Each will be given 33 percent of the space.

The remaining 33 percent will have all of the new flowers: larkspur, crysanthemum, amarathasis, asters,geraniums, saliva, gladiolis and a couple others I forgot the name of. Several of them are annuals but should produce substantial flowering, an improvement over the mostly green stalks last year that were meant to have pollinators and butterfly flowers.

This year the gardens should be going in around mid May (last year they were late almost mid June). This earlier start should have a positive impact on the growth rate of both the vegetables and the flowers.

The budget for this year is $300, and my order total totalled $269.89 with shipping and taxes taking about 20 percent of that total.

We are hoping for a new garden along the back treeline. This will be where the beans and geraniums will be planted. The fence garden will have the pumpkins and flowers as I mentioned above. The ramp garden will have peppers, tomatoes, and cucumbers for easy access and to set them higher off the ground than the other two gardens. The treeline garden has not been created yet so there is a good chance it will be late in being planted. My budget does not cover this third garden so it is up to others to provide the resources to create it (beyond the seeds I just ordered).

I will try and write a couple more updates and I will be certain to post pictures when the seeds have arrived. They are expected anywhere from now until May.